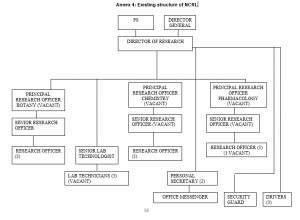 Originally, NCRI was headed by a Principal Research Officer. Currently it is headed by a Director of Research who reports to the Permanent Secretary MoH on administrative issues. The Director of Research also reports to the Director General Health Services (UNHRO) on technical issues. NCRI is constituted of a multidisciplinary research team of skilled and technical scientists. (Please refer to organizational structure in Annex 4).  With the creation of UNHRO 2015 Act, NCRI’s organization structure is expected to accommodate other professions such as social scientists, agronomists, conventional doctors, etc. This is likely to have a remarkable change on NCRI’s operations and reporting system.

NCRI comprises three technical sections namely: Chemistry (Analytical and Industrial), Botany and Pharmacology. Other support sections include Administration and Maintenance.     The activities of each section are detailed as below:

Botany section is charged with carrying out ethnobotanical surveys, herbarium specimen preparation and botanical taxonomic identification. It is also involved in conservation of medicinal plants.

Pharmacology department is charged with evaluation of safety, efficacy and stability of medicinal plant products and extracts of claimed therapeutic value.

Purchase, servicing and maintenance of laboratory equipment is done by the Ministry of Health.

Other cross cutting NCRL activities include training of stakeholders in different areas of traditional medicine such as conservation of medicinal plants, standardization and processing of herbal products and sensitizing stakeholders on the legal and policy issues related to TM.

The department also advises the National Drug Authority Board on issues related to herbal products in Uganda through chairing its Herbal Adhoc Committee.

The department was originally planned for 35 staff. However, during the 1990s due to government policies requiring downsizing of the public service staff, a ban on recruitment and early retirement was imposed. This resulted into numbers reducing to about 15% (Skelton staff) and this greatly affected most of the operations of the department. In 2004, the department recruited more technical staff to increase the number to about 50% of the expected establishment.  NCRL currently has 17 permanent staff out of the expected 35 establishment. Because of this shortage, the department has taken on contract technical staff as research assistants. This has raised the number to about 65% of the establishment.

The Institution is supposed to have only one personal secretary. However, it could benefit from having a general secretary to assist researchers in secretarial work (Researchers have a lot of technical reports to be typed). This post is currently not there.

The NCRI got part of its second batch of ordered scientific equipment (Laboratory heating mantles). We now have to...

A Center of Excellence for Scientific Research and Development in Herbal Medicine.

A CLINICAL EVALUATION OF EFFICACY, SAFETY IMMUNOGENICITY AND RELIABILITY OF UBV-01N- A NOVAL NATURAL PRODUCT- IN ADULT PATIENTS INFECTED WITH SARS-COV-2 (COVID-19), IN UGANDA